Each year, the Gaston County Museum showcases it's oldest collection item, the Kastner Bible, for a few weeks at the end of summer. Printed in 1564, this heirloom bible is displayed to coincide with the annual Costner and Rhyne Family Reunions for visitors to view the Bible that passed down throughout the Costner and Rhyne family lineage. This year the Gaston County Museum has decided to expand the annual Bible exhibit to include more treasures from its own collections, with a few additions on loan from the Abbot Vincent Taylor Library at Belmont Abbey College and St. Helen Catholic Church. Please enjoy this virtual representation of The Bible & Gaston County and consider visiting in person to see the exhibit, on display until November 27th, 2020.

Religion played an integral role in the history and development of Gaston County. Goshen Church was the first known church in what is now Gaston County, being established by the Presbyterians in 1764. Lutherans were among the first congregants, before establishing their own church called “Kastners” (eventually changing their name to Philadelphia) in 1767. African American churches began to form following the civil war, with St. Stephens A.M.E. Zion church being one of the first.

As the textile industry began to shape Gaston County and mill villages were forming, churches yet again became a central point of community. With each new textile mill a church or two were planted, with grounds upkeep and ministers being paid by the mill owners. This arrangement extended the mill owners’ power over every aspect of life for their workers, including spirituality. Ministers often praised mill owners and new industrialists as “redeemers of a people and a region.” One southern minister expressed that “it is imperative that we think of Southern Industry as a spiritual movement and of ourselves as instruments in a Devine plan. Southern industry is the largest single opportunity the world has ever had to build a democracy upon the ethics of Christianity.” With industry and spirituality now closely tied together, ministers and parishioners were obligated to accept or to turn a blind eye to harsh working conditions and racism enforced by mill owners.

From the 1940s onward, as mills began to shut down, several churches within those mill communities closed their doors. Despite this, religion has continued to have a strong presence in Gaston County, with over 100 active churches in the area today. The bibles and documents presented in this exhibit showcase the far-reaching impact that the bible, churches, and the communities surrounding them have had in Gaston County. 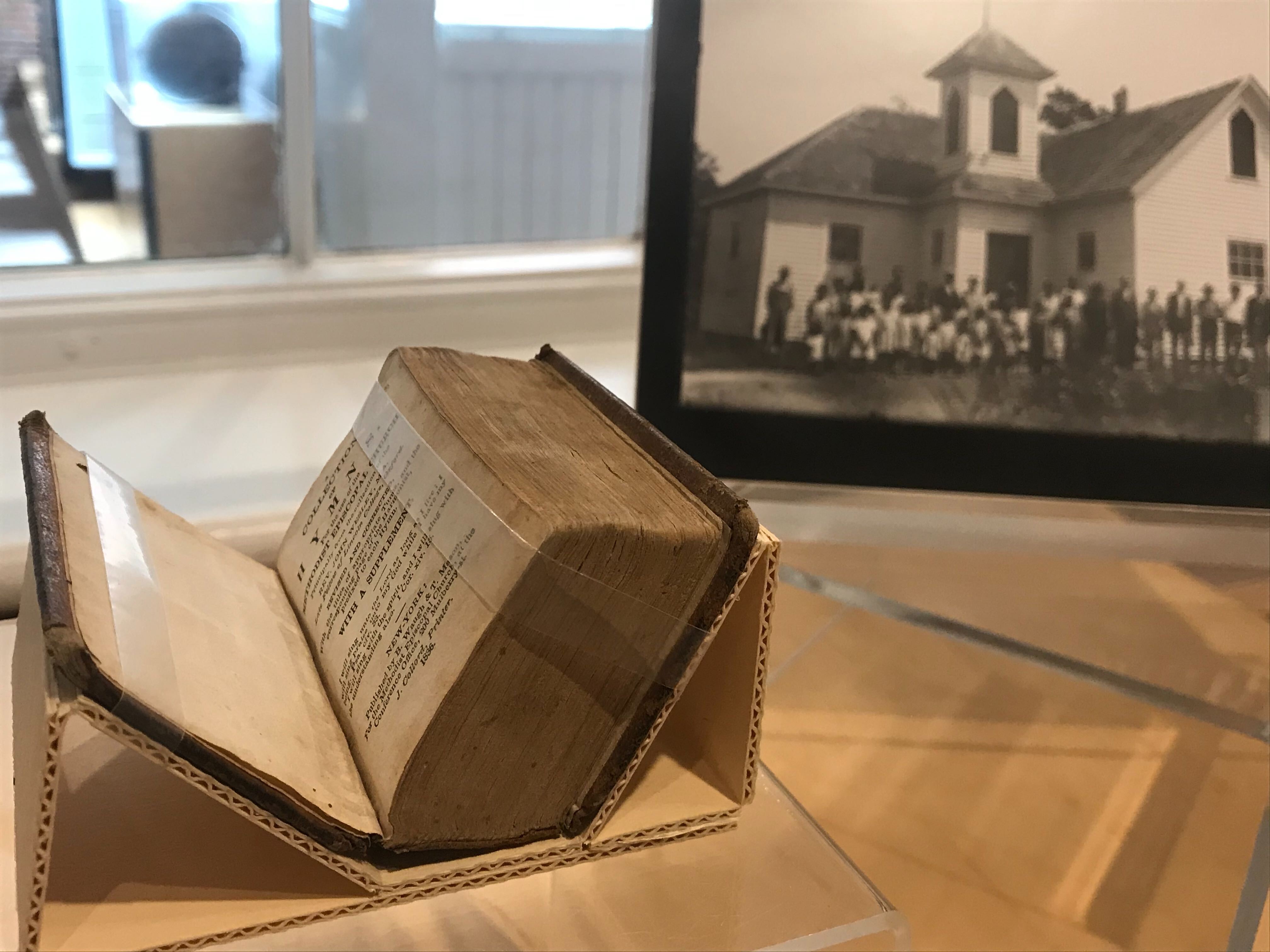 What is the Bible?

The Bible follows the creation of the world in the book of Genesis and finishes with the end of time in the book of Revelations. It contains 66 books, divided into two sections (Old and New Testament), written by more than 40 authors over a period of roughly 1,500 years. Altogether the Bible makes up one large story that centers on humanity's problem (sin) and God’s solution to send His Son (Jesus) to rescue humanity from this problem. As humanity has gone through many different periods, so too has the Bible, going through several translations throughout the centuries.

The Old Testament follows the creation of mankind, the corruption that begins wreaking havoc on it, and the promises and plan of God to rescue the world through His Son, the promised Savior. While the Old Testament prepares us for the arrival of God’s Son through prophetic glimpses, the New Testament shows Him to us plainly— Jesus.

There are thirty-nine scriptures in the Old Testament and it largely follows the Hebrew Bible. The New Testament was written primarily in Greek and has 27 books. Today the Bible has been translated to around 700 languages and spans every continent.

Before the 20th century when birth and death records became required by law, people would often record these events in heirloom bibles. These family bibles contained records such as birth, marriage, and death certificates. They were also used to support pension or land claims and generally anything else the family felt like writing down. Even non-religious families may have owned a family bible simply for the “records” or “register” section.

Here you can see family records that came from a bible belonging to the Pasour family, c.1800.

Bible
c.1804
This bible came from Harley B. Gaston Jr.’s lineage, a prominent Judge and community member from Belmont, N.C.
This bible is one volume of 5 of equal size. Here you can see the Family Record from the Bible, showcasing how the Bible was often used as a document for family genealogy. Occasionally slaves were also documented within the family bible— this bible has three slaves listed on a page by themselves, a few pages to the right from the page displayed.

Bible
1852
This bible, used by the Hoffman Family, was published in 1852— the same year the Hoffman Hotel opened. The back pages of this bible feature the Hoffman family lineage handwritten by C.J. Hoffman. Note the gilted leather cover. Bibles like this were usually passed down from generation to generation, with each new generation of family names being recorded in the Family Record within the bible.

Hebrew Bible Set
1565
This six-volume Hebrew Bible Set came to Belmont Abbey College as a donation following a fire in 1900 at St. Mary’s Priory in Virginia. The Bible was printed in the famous Plantin Press in Antwerp. Christophe Plantin was a humanist and the official printer of Catholic materials for His Most Catholic Majesty Philip II of Spain. He published the Plantin Polyglot Bible (a bible with parallel texts in Latin, Greek, Syriac, Aramaic, and Hebrew) from 1568-1572. It is believed that this Hebrew Bible was his precursor to the later version that was included in the polyglot.
Hebrew is read from right to left, and the original text of the Old Testament was written in Hebrew.

Kastner Bible
1564
The Kastner (Rhyne) family bible was first brought to America by Adam Kastner from Germany. The Kastners (Costner) first settled in Pennsylvania before settling in the early Gaston/ Lincoln area. The Kastners intermarried with the Rhyne family of this area and the Bible was handed down through the Rhyne family until it was donated to the Gaston County Museum.
Martin Luther, a German theologian and monk, first published his translation of the Bible into German in 1534. He continued to refine the translation for the rest of his life, with a corrected edition being published in 1545. In 1564, Herzog (Duke) Christoph of the territory of Wirtenberg (today: Wuerttemberg) commissioned another printing of the 1545 edition, which is what is displayed here. The Wirtenberg territory was mostly Lutheran at that time.
The front and back cover of the Bible are original wood, covered in leather. The Bible has gone through a page-by-page restoration at the Folger Shakespeare Library located in Washington, D.C. There are over 730 pages in the bible and a woodcut illustration appears about every seven pages, on average.

Statenvertaling (States Translation) Bible
1637
This Bible was the first translation of the Bible from the original Hebrew, Aramaic and Greek languages into Dutch, ordered by the Synod of Dordrecht in 1618. Previously, the first complete Dutch Bible had been printed in Antwerp in 1526 by Jacob van Liesvelt, but like other Dutch Bibles, it had been translated from existing translations. At the Synod of Dordrecht in 1618, it was determined that a new translation needed to be commissioned based on the original languages, not translations. The synod requested the States-General of the Netherlands to commission it. The translation was published in 1637, with half a million copies printed.

World War I Letters and Army-issued Bible
1918-1919
William N. Wilson was a Gastonia native who was drafted into the U.S. Army on July 15th, 1918. This was his army-issued Bible. In this letter back home to his mother, he writes:

The Bible provided great comfort to these young men in war, and oftentimes the President of the United States would print a small message within the first few pages of the military-issued bibles encouraging the men to read the Bible. Inside this bible is a printed message from President Woodrow Wilson.

Smith’s Bible Dictionary
1929
Bible dictionaries like this one would have been a nice addition to any quiet time spent in the Bible. This bible dictionary would have provided clarity on readings in the Bible by providing definitions, chronological tables of events, maps, charts and background information to deepen biblical understanding.

African Americans and the Church

Failing to deliver political, economic, or social equality, emancipation did give African Americans the freedom to worship in their own churches. Previously, slaves had to sit in a segregated section of church sanctuaries and oftentimes listen to the pro-slavery rhetoric of predominantly white Southern Christian churches. African Americans had cultivated a deep religious faith in secret slave churches before and during the Civil War, and with the end of the Civil War they were finally free to worship in the open with their peers.

The majority of African American congregations in Gaston County are predominantly African Methodist Episcopal, A.M.E. Zion, or Baptist churches. One of the earliest churches was formed in 1879 in the Neely Grove community, located between Cramerton and Gastonia, as Center Baptist Church.

Oftentimes tenant farmers living and working on white-owned land were unable to afford the land and construction costs of a church building. Many tenant farming communities had their own churches due to their white employers, who donated land for that purpose. This charity came with an alternative motive—religion was a stabilizing influence, and landowners believed that church-going tenants would be more hard working and dependable.

For the Catholic community, a religious sister and philanthropist named Katharine Drexel was instrumental in the desegregation of the local catholic community. In the 1890s she donated a large sum of money to Belmont Abbey, then known as Maryhelp Abbey, with the stipulation that African Americans could worship there. As a result, the Abbey complied and founded St. Benedict Catholic Church and school in Belmont, and St. Joseph Church and school in Spencer Mountain. St. Joseph merged with St. Helen church in the mid-1930s, and today is known as a primarily African American parish.

Victory Songs Hymnal
1920
Music is a central part to an African American church service. Before Gospel music began to rise to popularity in the 1930s, the African American spiritual had already been around for well over a century. Songs written by African American composers in the decades following emancipation often focused on biblical themes and often drew from these spirituals, leading to the development of Gospel music. Eventually, this influence was also key to the development of rhythm and blues.
Homer Rodeheaver was the publisher and compiler of Victory Songs. His inspiration for many of these songs came from African American spirituals because of their emphasis on harmony and rhythm and their “definite religious purpose.”

Window, St. Helen Catholic Church
St. Helen Catholic Church began in the 1910s on Spencer Mountain. In 2004 the window you see here was taken down to be replaced.
If you look closely, you will see that this window is not a true “stained glass” window. True stained glass was usually made by using glass colored by metallic salts, which was then fused together by strips of lead, thus creating an image or pattern. Stained glass windows were often called a “poor mans bible”— for people who were illiterate, the images created with the glass showed them the message of biblical scriptures that they could not read. As more members of the Christian community became literate and it became more common for families to own their own bibles, stained glass became more of a decorative element for church windows. This window is an 20th century example of the “poor man’s bible”.

Come see The Bible & Gaston County in person, on exhibit until November 27th, 2020!

Special thanks to St. Helen Catholic Church and the Abbot Vincent Taylor Library at Belmont Abbey College for their contributions to this exhibit.