For many reasons, the egg is a traditional symbol of Easter. Eggs are a clear symbol of rebirth and fertility, so it is no surprise that they are associated with Easter, a holiday that celebrates the resurrection of Jesus Christ. Decorating eggs can be traced back to ancient times, when ancient Persians and Egyptians dyed eggs and gave them as gifts in the spring. In 1290 the household of Edward I bought 450 eggs to be decorated and given out as gifts. Eggs dyed red were used to symbolize the blood of Jesus, new birth, or good luck. The tradition of decorating eggs as gifts has a long history, but no one has ever decorated eggs as elaborately as Peter Carl Fabergé.

Peter Carl Fabergé (1846-1920) was Russia’s most famous jeweler and the creator of the Fabergé eggs. He starting his career in a family workshop in St. Petersburg in 1870 before making his own name as a talented goldsmith. In 1885, he was commissioned by the new tsar, Tsar Alexander III, to create a decorative egg for his wife, the Empress Maria Feodorovna.

Fabergé produced an estimated 69 eggs created between 1885 and 1917. Of these, and estimated 52 eggs were commissioned by the imperial family, which is why they are called imperial eggs.  Faberge prided himself on his craftsmanship, and each egg was always more than it seemed. They would always have a surprise (or 3!) inside, making the intricate designs all the more valuable.

The eggs in this exhibit showcase how Fabergé’s influence has spread all over the world, making this traditional Easter symbol a decorative phenomenon.

Theo Fabergè's hallmark, a "TF" seen on his creations.

The following eggs come from Theo Fabergé, Peter Carl Fabergé's grandson. Theo came to know his family legacy in a unique way-- at the age of 47, he discovered that he was actually the son of Nicholas Fabergé, the youngest son of Peter Carl Fabergé. Because Theo was born out of wedlock, his mother decided to let her sister and her husband raise Theo so that Theo would not be shunned by society. While traveling back from a family funeral, Theo's "aunt" (who was actually his birth mother) advised Theo to obtain a copy of his birth certificate. Theo had never seen it, and when he retrieved a copy of it, it revealed that he was actually the son of Doris Cladish and Nicholas Leopold Fabergé. He was stunned.

Theo now realized why he had always had such a strong leaning towards the arts. He had been doing work with precision engineering, but was ready to move on to a new career field. With this new revelation, Theo began taking a part-time course in silversmithing. He quickly grasped the fundamentals of this craft and soon began undertaking experimental work with enamels and silver. As Theo's skills grew, he realized that he had found a craft that connected his love of art with that of engineering.

Theo was adamant to make a name for himself in this new art form and didn’t intend to create eggs. He felt that his grandfather had perfected the craft of decorative eggs and did not feel that he could add anything to the art. However, Theo eventually cracked and began to delve into the world of egg craftsmanship.
Theo began taking private commissions for his eggs, but soon decided to launch the St. Petersburg Collection in 1985 in order to improve the availability of his work. Each design was limited to a maximum of 750 pieces worldwide, with some being limited to as little as 125 pieces.

Like his grandfather, Theo’s standards for his eggs are of the highest. All of the eggs have a story and most contain a hidden surprise. Theo himself did most of the engraving on these eggs.

This Theo Fabergé creation is in tribute to his grandfather, Carl Fabergé who was one of the first to interpret oriental influence into jewelry. Thus, the egg is made from jet black crystal and hand painted with raised 23 carat gold-- a design inspired by the delicate work of ancient oriental craftsmen. The fiery eye of the dragon is a glittering faceted ruby. 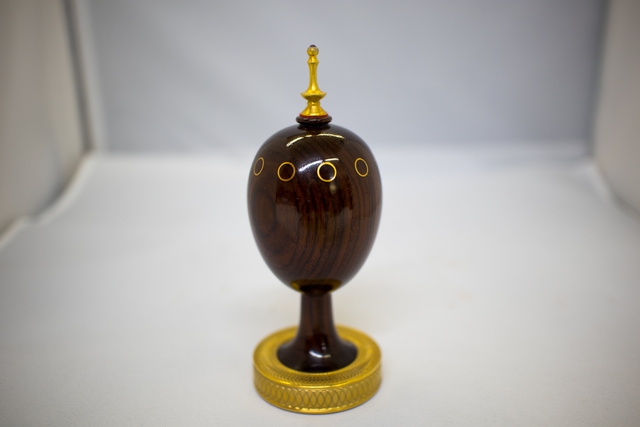 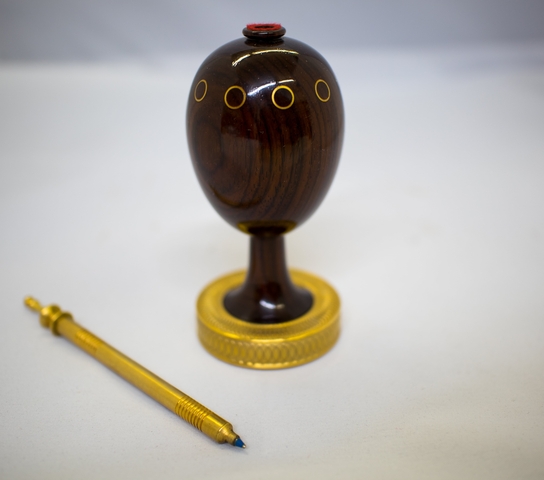 The Scribe Egg was the first of Theo Fabergé’s creations for the St. Petersburg Collection. It is made from the cocobolo wood, a rare and exotic wood from Central America. The egg is inset with rings, whilst the base and the 24 carat gold finial are ornamentally turned on Theo Fabergé’s own Holtzapffel Lathe. The surprise within is the Scribe’s pen, which is 24 carat gold plated and embellished with a single cabochon ruby.

In celebration of the millennium anniversary of Russian Orthodox Christianity, Theo Fabergé was commissioned to create The St. Vladimir Egg. Evoking the splendor of Russia, the hand cut crystal Egg is decorated in rich burgundy enamel complemented by intricate silver designs. Crowned with a vermeil dome from which the sterling silver Russian Orthodox cross rises, the Egg opens to reveal a sterling silver scaled re-creation of St. Vladimir's Cathedral, which stands on the site where the first baptism took place in the year 988 BC, in Kiev. 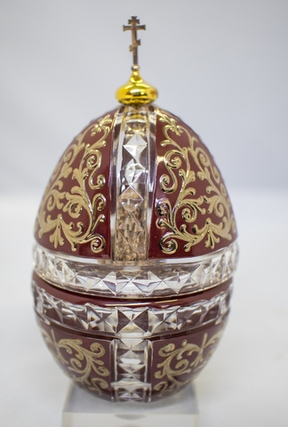 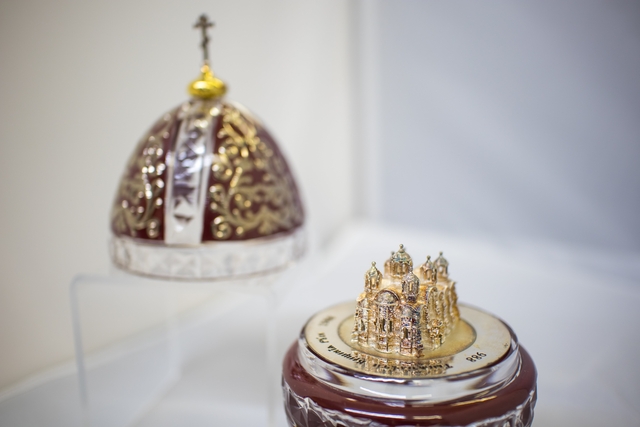 The Swag Egg presents Theo Fabergé’s skill with both wood and lathe. It is made of cocobolo wood encircled with swags and mounted with the Russian Imperial Crown, all of vermeil. The Crown is set with fine cabochon ruby. 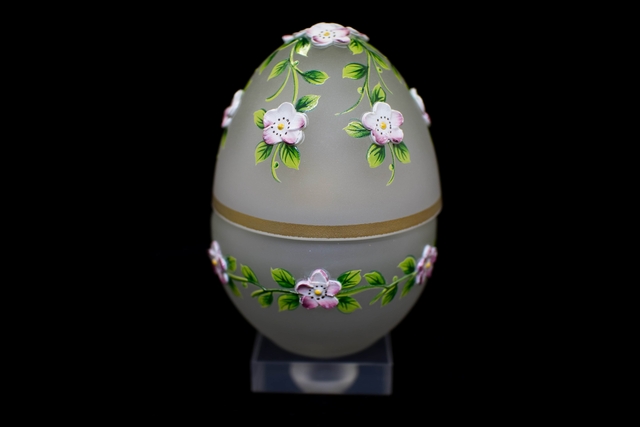 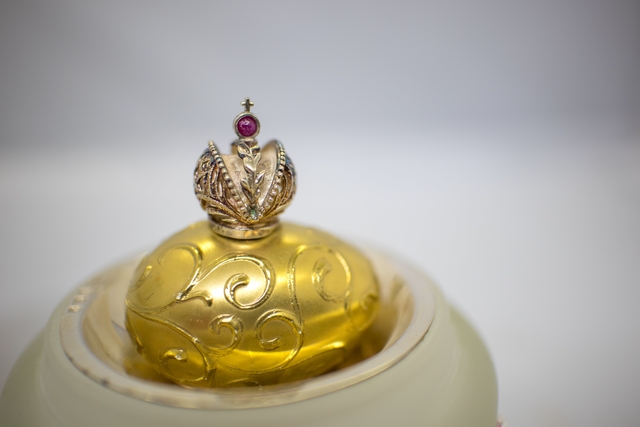 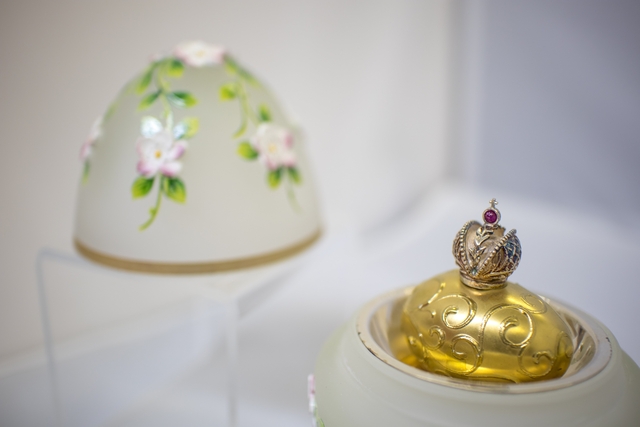 This egg seeks to unravel the mystery of the egg and its symbolism of life and rebirth. The delicate, hand painted enameled spring flowers raised from the crystal surface express the regeneration of nature after winter, when the land will once again blossom and bear fruit. The surprise is the golden yolk upon which is set the Imperial Crown in sterling silver which reveals a hidden compartment. 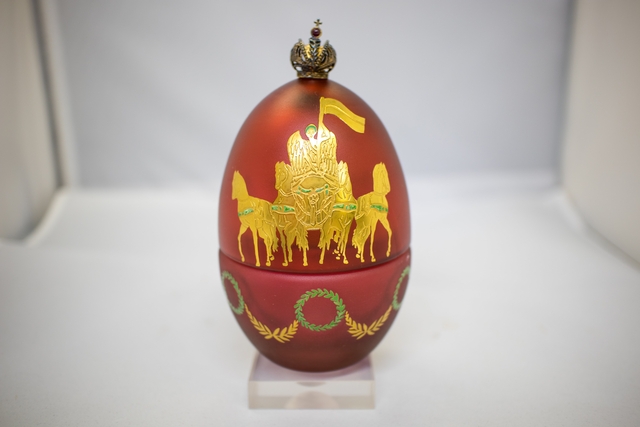 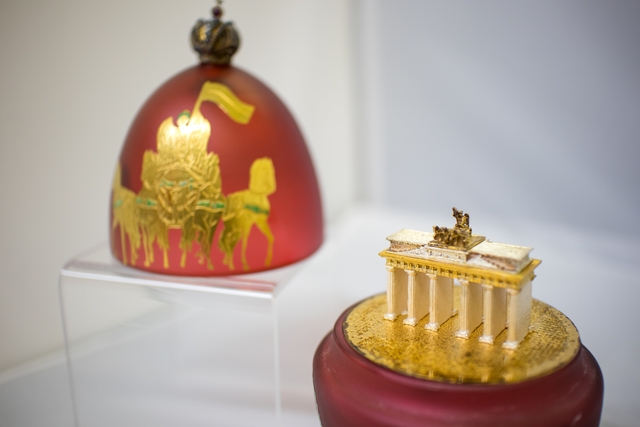 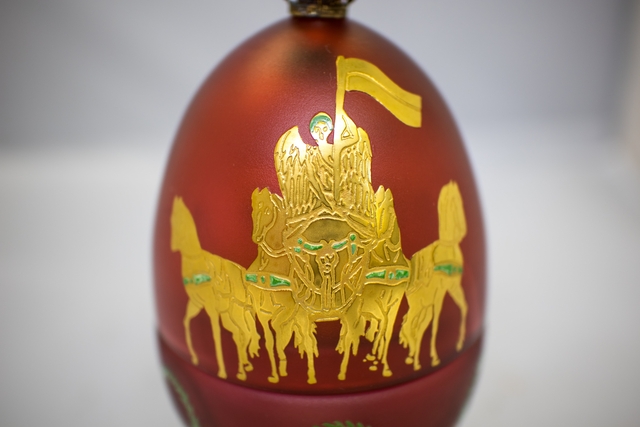 Rich cranberry crystal is decorated with a 24 carat gold illustration of “Winged Victory” driving her chariot. On the reverse, two doves of peace hold a wreath. The Egg opens to reveal a sterling silver replica of the Brandenburg Gate, once a symbol of division yet today a symbol of freedom, both literally and of the human spirit.

As its name suggests, The Four Seasons Egg portrays the individual character of the year’s seasons. Spring, summer, autumn, and winter are represented in rich hand painted enamels, each in an elegant oval panel. The egg is made of 24% hand cut lead crystal and adorned with hand painted 23 carat gold. The Imperial Egg, in vermeil, is set with a fine cabochon ruby.

Vermeil (pronounced vehr-may) is a legally regulated term that refers to a certain kind of quality jewelry. Vermeil pieces are made with precious metals with heavy plating to ensure the quality lasts. You may have heard of gold-plated; gold vermeil is superior to gold plated items. Theo Fabergè used vermeil in many of his designs, as seen above.

What does the Egg mean?

Eggs have long been a part of spring rituals. After a long winter, chickens and other birds begin to lay eggs again, which are bursting with new life. Similarly, the entire season of spring fosters in new growth and bright blooms of life. This symbolism of eggs representing new life predates Christianity.

For Christians, eggs connect the new life found in the resurrection of Jesus Christ to Easter. They symbolize not only that Jesus came back to life, but also the new life someone finds when they come to know and accept Christ as their savior.

Abstract porcelain egg made by the Royal Copenhagen Porcelain Manufactory.

Born in the Ukraine, Ostap Kobycia was a master craftsman who was taught by his father how to carve the intricate Ukrainian designs that were popular in dyed Ukrainian Easter eggs. He and his wife fled the Ukraine during WWII, settling in Australia in 1948 as U.N. refugees. They made their living selling elaborate carved decorations, including Easter eggs such as this one. In 1972 they moved to Pennsylvania ,where him and his wife continued to support themselves though their traditional Ukrainian carvings.

This ceramic egg is made by the Herend Porcelain Company in Hungary. Established in 1820, Herend china was soon sought after all over the world due to the fine craftsmanship. After exhibiting in London’s Great Exhibition in 1851, Queen Victoria fell in love with the intricate designs featured in Herend china and purchased a set for herself.

The eggs in this exhibition represent only a small portion of a much larger collection that took more than 30 years to gather. In 1970, George Poston, a well known Gastonia real estate developer and host of an annual Easter Egg Hunt, recieved an egg for a birthday present. His wife, Edith Poston, became enamoured with the egg and began a collection that she would add to for the rest of her life.

Edith devoted herself to the study of the mythology and symbolism of the egg in various cultures throughout history. She also gained a thorough knowledge of the techniques used by the artists who created the eggs in her collection. As the couple traveled, they would collect eggs. Upon her death in August 2005, Gaston County Museum recieved her cherished egg collection. This collection serves as Edith Poston's legacy of love for knowledge and pride in comminuty for the residents of Gaston County.

This egg was the first in this collection. It was made by Ekenas Glass, a prominent glass company in Sweden that ran from 1917-1976. This egg is one in a series of lead crystal eggs featuring Zodiac signs etched onto the face. George Poston was given this egg when he was 70 years old, prompting Edith’s interest in decorative eggs.

This painted turkey egg shell was painted by John Mervyn Jelley of Charlotte, N.C. Inside features a detailed painting of St. Mark’s Episcopal Church in Gastonia, N.C. Edith commissioned this egg as a birthday present for George, but it became a memorial for him. George Poston passed away on Nov. 21st, 1977. 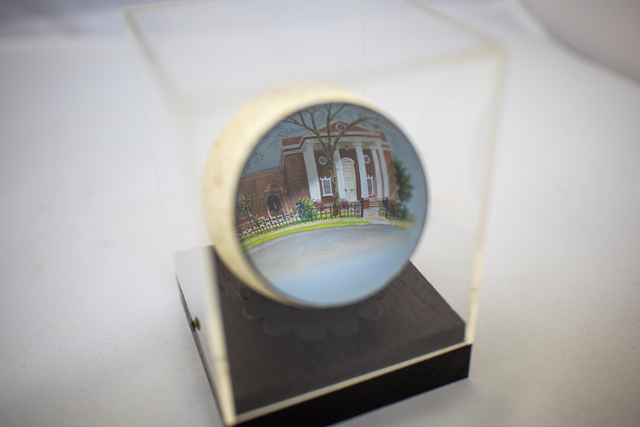 An Imperial Easter will be on display in-person in the Gathering Room from March 2nd- May 29th, 2021.

The Gathering Room is located on the first floor of the main museum building at 131 W. Main St, Dallas, NC.